CONCEPT:
Medieval Times Dinner & Tournament is North Americaâ€™s longest running and most popular dinner attraction. Guests experience an evening of quality, family entertainment inspired by 11th century history; and witness live jousting, swordplay, horsemanship and falconry. Guests are taken back in time and encouraged to cheer for one of six â€śKnights of the Realm,â€ť named after historic regions of medieval Spain, while feasting on a four-course banquet served in true medieval, pre-silverware fashion.

PROGRAM:
The visitor experience begins as guests enter the 11th century, European-style Castle. In the Hall of Arms, guests admire the display of medieval artifacts. There is also a Museum of Torture, which features reproductions of torture instruments used during the Middle Ages.

Trumpeters announce the call to the feast, summoning guests to take their seats in the arena. Once inside, guests are greeted by King Don Carlos and Princess Catalina, who invite them to share in a regal banquet and cheer for their own Knight of the Realm â€“ designated by six color â€śzonesâ€ť of seating representing six authentic regions of Medieval Spain.

In the arena, guests feast on a four-course dinner as the live show opens. The Herald of the North delivers a gift to King Don Carlos that could unite two kingdoms together forever, or forever cause two kingdoms to be joined in battle. Next, the arena quickly fills with the thunder of hooves as the Lord Chancellor leads the cast through a spectacular display of equestrian skills and medieval pageantry.

The pace quickens as a Tournament of Games begins. The valiant Knights on horseback face their competition in games of skill, such as the ring pierce, flag toss and javelin throw. As battles ensue to maintain good over evil, guests cheer their own Knight to victory in authentic jousting matches and dangerous sword fights.

CASTLES:
Medieval Times Castles vary in size from 70,000 to 110,000 square feet. Each Castle features the Grand Ceremonial Arena with seating for up to 1,100 people. The fully-enclosed, climate-controlled Castles house an elaborately decorated Hall of Arms, Museum of Torture, Knight Club, an aviary and stable facilities.


RESERVATIONS/ADMISSIONS:
Castles open 75-minutes prior to show time. The show length is approximately two hours. The schedule of show times varies by season.

Admission price includes the show, dinner and two rounds of select beverages. Groups of 15 or more should book reservations in advance with the Group Sales Department.

Seating at the Castles is limited and reservations are strongly recommended. Please call 1-888-WE-JOUST (888-935-6878), or visit www.medievaltimes.com for show times. 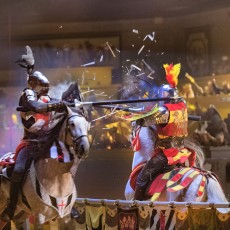 Enrolling our son in the Ciraco program was One of the best things we couldâ€™ve... MORE Â»

Best dojo ever. If you want your kid to have great mental and physical strength ... MORE Â»

We love Ciracoâ€™s karate. My son has been going for three years now! They go ab... MORE Â»